It’s an old story – man starts working from home and gains weight. Man decides to lose weight and succeeds. Then man puts it all back on again. But wait, there’s a twist! What if you lost fat and then put on muscle? That’s what I did, and this is how I did it….

A few of you may know the Andrew (from We Build You Blog) and I have been on a quest to become healthier while working at home.

Back in 2006 when I was working in an office in a 9-5 job I was pretty fit. I was playing football/soccer twice a week, going to the gym and walking at least five miles every day in total to and from work.

Then my life changed

I moved to the US and started to do what many people reading this will be doing – working from home. I thought I knew how big the change would be business-wise. Boy, was I wrong.

I was now doing what I always wanted to do – working for myself. That meant that every minute counted, I was working alone without direct personal interaction with other colleagues, and being my own boss meant I could control how I spent my time, which often meant working very hard for long hours.

However there was one unanticipated consequence – my health. 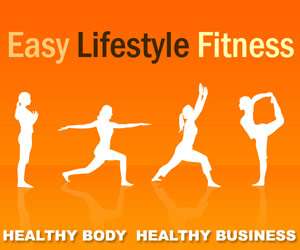 I’ve never been fat, I’ve never even been technically overweight, however my body shape was beginning to tell a different story. I went from doing a great amount of exercise to doing almost zero.

My commute is about 20 yards and once I start working I usually get into “the zone” where I don’t get out of my seat for hours at a time.

Time is money and when working for yourself this is even more acute. Deciding between an hour of exercising or an hour of working becomes almost no choice at all – working won every time.

As time went by, my belly began to extend and a double-chin developed. My arms thinned out and I generally did not have much energy to do anything but work. My family became concerned about what this sedentary lifestyle was doing to me.

Time for a change

Early in 2010 I thought I would start doing some more exercise, and for a while tried to get my body back into the routine of doing some exercise. A great client of mine provided me with an exercise plan which included more walks and some basic, beginner exercises, but as work got busier again in the next couple of months, time became less and less available and the thing that got pushed to the side once again was exercise.

I thought the day after my 33rd birthday would be a great time to start a proper exercise and diet routine. I did some research, discussed exercise, food, and time management strategies with Andrew and talked over my plan with my wife, who, frankly, was delighted with the idea. We share the cooking so the “diet” and nutrition plan was great with her, and so in mid-April the change in my lifestyle began.

Today as I write this it is almost exactly eight months later and the change is pretty astounding.

I won’t tell you it was easy, because it still isn’t. The plan isn’t finished, and never will be, but with no false promises, no hyperbole, no PhotoShop, I can tell you, if I can do it, you can too.

Back to the headline, I now weigh the same as when I started. However I first lost 15lbs of fat, getting down to a weight I hadn’t seen since my early 20’s. Then I guess I must have put on 15lbs of muscle, as it’s definitely not fat!

Don’t believe me? Want to see my progress? Check out the 30 second video below of me (and my man nipples…):

My motivation partner Andrew has lost 25lbs! You can read about how Andrew and I did it here:

A Quick & Easy Guide To A Healthier Working From Home Lifestyle

It’s free, with no affiliate links and nothing to sell you.