You may wish to read Part 1 and Part 2 first where I talk about the idea for the plugin and early proofs of concept.

So the first thing to decide on creating a plugin (after, of course, deciding to make one at all!) is whether to do it yourself or hire someone to do it. Not having the skills or time (or really desire) to learn to do it myself I set about hiring someone to do it.

Finding a developer should have been relatively easy, but it’s actually very difficult. PHP programming skills are in high demand which means the best are either very busy or very expensive, or both. I don’t want to go cheap so I found a medium level US company to develop the first version of the plugin.

To be honest, this relationship didn’t go well. I won’t name the company as they’re still big in the WordPress world and it was really both our fault and a fault of timing. Neither of us understood the time and complexity that would evolve and the proposed 6 weeks turned into about 7 months.

The plugin worked, and produced a simple report as shown below. However it quickly became apparent that gathering the data on-demand like it did was taking too much time and causing problems with loading time and lots of zeroes – as you can see below. 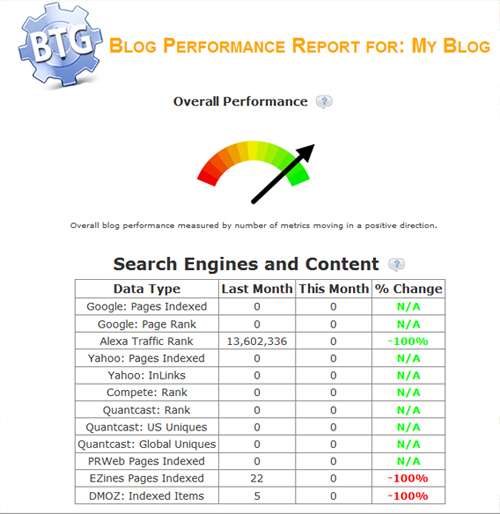 So at this point I was speaking to Andrew Rondeau of We Build Your Blog about the plugin and the issues. He had some great suggestions, as well as providing validation of the idea and what I was trying to achieve. So it became our plugin rather than my plugin.

We did a lot of research and hired another company to do the next stage of development.

We needed to make the plugin more robust and not time out and cause problems. So the company we hired built a website that gathers the data for you. So when you run the plugin the data is pulled down from our server which already holds the data, rather than querying 50+ different statistics.

They also built the login system and everything that you still see on the site at this moment.

After a few months this version was complete. However (how many times have I said that in this series of articles?!) it became clear they didn’t really understand WordPress that well (the website is not built on WordPress, something we will be moving to eventually) and we wanted to deal with a company with more expertise in WordPress.

So the company we have hired (and still used) cleared up a LOT of outstanding issues with the plugin, the website, and the (almost ready) affiliate system. A few weeks ago the plugin was released into the WordPress.org repository and there is a completely free version available.

In part 4 I’ll answer some of the commonly asked questions about Pro Blog Stats. In the meantime, why not download it and give it a try, it’s free!