In Part 1 I quickly talked about the problem I have had in the past with gathering data and the thought there must be a solution to the problem of too many data sources.

When I started blogging in 1999 (I think, it might have been 1998) measuring traffic was pretty important but a fairly simple process of measuring unique hits. These days it has all changed with bounce rates, comments, click through rates, RSS subscribers…

When I started working with paying clients for BTG back in early 2008 it became apparent a better way of getting all this data in one place was required. Yes, it’s taken three years to get to this point!

Initially I started keeping track of things in Excel. Partly because I was very familiar with Excel and could write macros to produce reports from the data I gathered. However in the only screenshot I could find of it, you can see it looks a bit rough and ready. 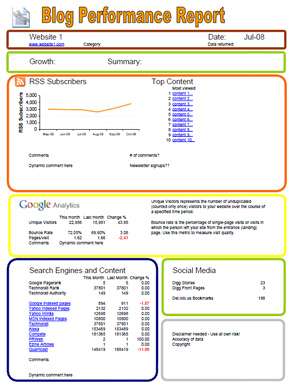 However it did what it was supposed to do, but it was still taking me too much time to gather the data. At this time it was still an idea for me to produce reports for clients, so a matter of saving them and me time. So I decided to automate getting the data into Excel in a format then I could automatically create the report.

I hired a developer on RentACoder (now Vworker) to develop a piece of desktop software that when given the URLs will go out and gather the stats and save that as a .csv which I could then import into Excel and use to automatically generate my report.

The good news is that it worked brilliantly! The screenshot below shows how it looked in it’s basic format. Click for a larger version. 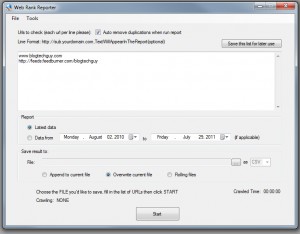 It didn’t take much for me to enter the URLs (it saved them) and bring down the data, then a few minutes later I had a report. However there were a few problems, with the main one being that a lot of services required the username and password of many sites in order to get access (just for the record the Pro Blog Stats plugin doesn’t require any usernames or passwords!). This became a pain and was a barrier to getting the information quickly.

Then I began thinking about making this a WordPress plugin. The two previous versions were really just proof of concepts. We could get the data directly into WordPress and the user could run reports themselves and pay for the plugin. Well that idea would take a years to come to fruition! I’ll talk more about that in part three.